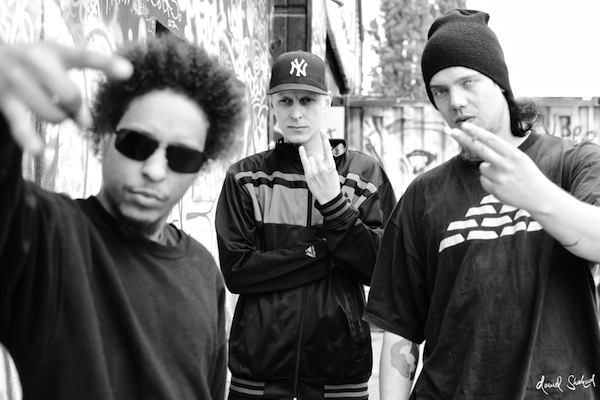 Dope D.O.D. from Groningen aka Ghost Town claim to be members of the new generation that will take over. Not only the music but the whole society. When we did our interview in Vienna, the three rappers seemed to be pretty relaxed and not in the mood to change anything. Meanwhile they explained us what this new generation is all about, why two of them named themselves in allusion to Sid Vicious and Johnny Rotten of the Sex Pistols, and why they see parallels to one of the most influential punk bands ever.

You can find the interview introduction with Jay Reaper here: https://themessagemagazine.at/?p=19919

Jay Reaper said in our interview introduction, that the only prominent persons from Groningen he knows are Abel Tasman and Noisia. Do you both know anybody else?
Dopey Rotten: Well, Arjen Robben for example. For the rest I can’t think of any big names. Noisia, Arjen Robben, Abel Tasman, Dope D.O.D…
Skits Vicious: We got also Kraantje Pappie, a rapper who is definitely well known in the Netherlands, but not beyond the national borders.

Do you support any local football club?
DR: Of course, I support FC Groningen because I´m from here…but in fact they suck. I’m a big football enthusiast in general.
Jay Reaper: I support a team when it actually plays well. I like especially small teams, which play good, Vitesse for example.

Did FC Groningen never play well?
DR: They played well now and then, especially at the beginning of the 80ies. Back in those days they had also a small spree in the UEFA Cup. That was their golden era, from then on it went worse.
SV: Indeed they play some good matches from time to time and made it higher up in the league from time to time, but there was never a development towards keepin’ it that way.

At your last two tour-stops in Prague and Warsaw Dopey Rotten wore dresses of Sparta Prague and Polands national team. Did you picked any dress for today?
DR: Not yet. It depends on the organization. If they give me one, I’m gonna wear it. If you don´t see me with a shirt, you know the organization didn´t give it to me.

Isn’t it risky?
DR: Normally the promoters check it up if there is a big rivalry between two or more football clubs in town. That’s why I got the Poland shirt. They said to me: if you were the dress of a local team you will be beat up tonight. So yeah, sometimes it can get you into problems wearing the wrong shirt. But I always get warned in advance.

Why do you both call yourself after Sid Vicious and Johnny Rotten (2/3 of the Sex Pistols)?
DR: We have both English heritage. My mom is English and his mom too, so we got introduced to the Sex Pistols music at a young age. Skits came up with the name-idea, actually.
SV: It´s just a homage to the rebel essence they stood for. Our music has the same essence: stick it up against rules and the government. Just as the Sex Pistols we are also from Europe. It´s very simple, we didn’t try to steal their names or make the same stuff like them. Like Rick Ross and 50 Cent, they took their names from dealers they know. ‘Cause that are the people, that they look up to in their neighborhood, and they pay homage by taking their names.
DR: My mom was always very much into Reggae, so lots of Bob Marley, lots of Alpha Blondy, Burning Spear and stuff like that. But when the Six Pistols blew up, it was a more political thing than today. I can´t say that we have it that bad like it was in those times.

You rap in „Gatekeepers„: „There’s no breaking the rules, cuz we made them, this is the start of a new generation.“ Who is this new generation?
DR: The new generation is the one who will take over the torch from people that are in charge now. Young people have to wake up and go for whatever the fuck they wanna do. Don’t be influenced by what the state says to you. For example: if you wanna be an musician: go for it!
SV: It also fits to the time when it came out in 2011. It was a start of a new decade as well. I think that until 2010 we had a really shity decade for music in general. Now the whole vibe is changing and there is more good music coming out again.
DR: There are a lot of rules in the world but you have to make your own rules, as long as you don’t go into jail for it…it’s your world!

What are the rules that you would give further to the younger generation?
JR: There are a lot unwritten rules in our society: like act normal, don’t do crazy stuff, don’t smoke weed…all that Christian bullshit, very narrow minded stuff. But I would say: go out there and live fucking life. And try fucking everything. You have to do what you feel and not what someone other told you.
SV: I think the main rule we made is: there are no rules. And that’s the key at least to me. You have to live your own life and do what you want to do. Then you will get whatever you want to get. And achieve what you want to achieve. If you live after rules that some other made for you, you will be trapped down all day. 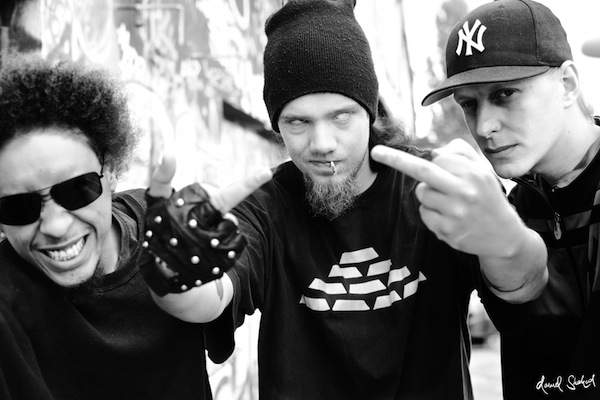 How would you describe the „Butterfly effect“ to somebody who didn’t listen to the same titled track on your new album?
SV: Our track „Butterflies“ is la sequel to this song. It was the way we felt when we wrote the track. You got your local sluts and fucking around…it’s like a sex track. A dirty and evil one, one which is not for married couples or loyal girlfriends. This is for the dirty ones. The „butterfly effect“ is more about the effects of the first track: a lot of chicks wanna do the same shit with us we did on „Buttlerflies“. We spread the virus and this is the effect. It stands for a chain reaction. A change in time. In our case it´s a change of asses.

Nevertheless I would say that both tracks don’t show much respect to women. You are also pretty popular in Holland. Were there any feminist reactions?
DR: Well, I haven’t heard them yet…but they can suck my dick.
SV: The reason that you don’t hear that is also that it’s not the main point of the track. I think the point is that this track is for everybody that gets down and dirty…that’s for you! And I think that a lot of people have sex with different people. It´s not an insult.
DR: And I do respect women, though. But you shouldn’t take this all too serious. We don’t rape women.
SV: No, you should take it serious!
DR: Not too serious.
SV: If you can relate to it. I’m very serious in my tracks, especially when it comes to the „Butterfly effect“. But this doesn’t mean that it’s an insult. Chicks that fuck a lot of dudes are not sluts to me. People like to label it that way: but there are a lot of dudes that fuck a lot of chicks, too. Be free and fuck! You are here on the planet to fuck. You are not here to be afraid.

An interview introduction with Jay Reaper