He’s been through some tough times and it took him a while to get back on track: Jonwayne spent nearly two years on “Rap Album 2”, a blessing so honest and raw it feels like sitting right next to him in the recording booth while he’s dropping his deeply philosophical rhymes. Jonwaye is an exceptional artist with a keen sense of who he is and how he wants to present himself to the world. It takes a lot of hardship to gain this kind of high level of clarity. During his live show in Vienna we were able to catch a glimpse of the man Jonwayne has become and why his followers strongly believe in his musical vision.

The Message: One of the first things you took off during your concert were your vest and your shoes. Was this an attempt to connect with the audience, to open yourself up by letting go of your outer layers or did you simply do it to feel more comfortable?
Jonwayne: I think everybody who says they think metaphorically like that when they do things like this on stage are full of shit. I think it’s convenient, but I just like to feel comfortable on stage. Cause if you’re up there for an hour, you might as well feel comfortable.

You talk about what’s gonna happen when you die and how you’re gonna live on after death. In which way are you gonna live on, is it through art or more in a spiritual way?
I think probably one of the biggest questions that people wanna have answered through their lifetime is, „How do I preserve my legacy beyond my mortal coil?“. I think we all struggle with that and I think we all have to answer this question at some point and to everyone it’s a different answer. For some people it’s having kids who look exactly like them or doing charity. It’s in your heart. Everyone struggles with that. I think the question is a little loaded.

On “Paper” the first words you say are, “When I die I wanna grow into a tree”. How can we picture a Jonwayne tree?
Paper in itself is more like an entire metaphor using different forms of paper to discuss the prioritization between public legacy and personal salvation and the fact that you can’t always have both, you have to prioritize. So it’s really just a big metaphor.

For becoming free?
No, just like having inner peace, finding an inner peace. Securing things with friends, I guess that’s important to everyone, but it just depends on what you need or what you’re seeking.

You’re out on tour. How are you enjoying Europe and do you see any difference in what’s going on here politically compared to the US?
I’m not political, so I won’t comment on that, but I enjoy Europe. It’s just the small things, when you’re not from a country and you go somewhere and it’s also a first world country there’s a lot of similarities, but still things are just slightly different. Like when I go to Paris and I go to McDonalds it’s actually really dope. McDonalds is trash food from where I come from, we were having like Gruyere cheese on a brioche, with real meat here. In the U.S. it says you shouldn’t serve the meat you get at McDonalds to pregnant women. So yeah, I really enjoy seeing other parts of the world.

Let’s go back to the performance – it was not a typical rap show. You didn’t hype the crowd, you just let them sink into it. It had more of an theatrical aspect to it. Where are you planning to take your stage performance in the future?
Stage performance in rap music hasn’t really gone anywhere in the last 30 years. You have someone on stage and you have people behind them and you have someone dancing around, hyping people up, asking for crowd participation. People used to do that because hip hop started as party music that was being converted into a recorded format. So for that kind of music it makes sense and that tradition continued, but when you hear music now there’s none of that. So it’s kinda weird how people still stick to that. I’m not necessarily trying to make any statement other than transfer the experience that I have with my music on to the live stage and it boils down to just being able to perform well and establish myself and to make real connections with the audience. 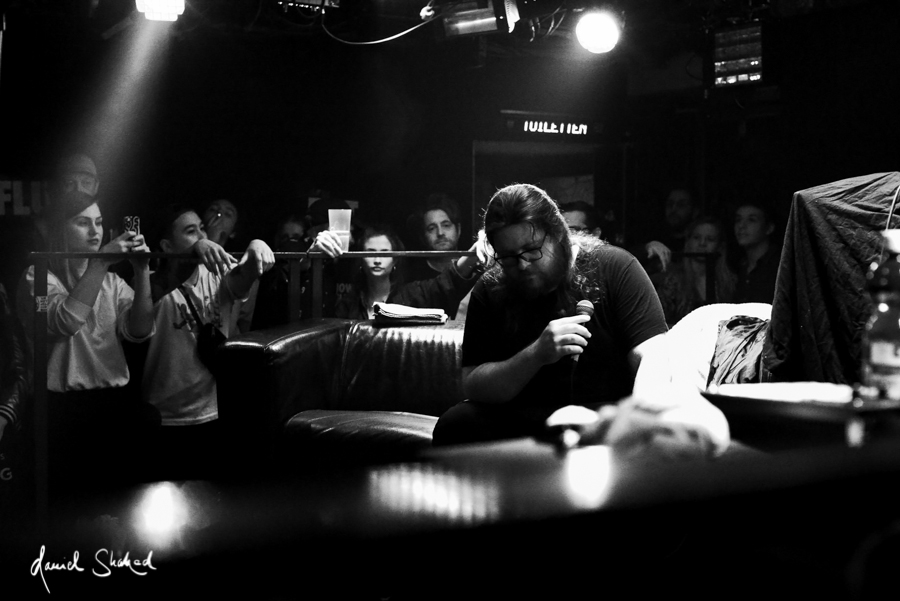 I noticed you just used a very minimalistic setup. The Roland SP-404SX and a mic. You used the sampler to cut the beat off and highlight your vocals. When did that idea come up?
I usually have a band, but it wasn’t possible to have them here on this tour so I have to do things by myself and I just do it the way I used to. Mimicking the DJ edits and the DJ drops. I like performing by myself and controlling all that, as far as I’m concerned if someone isn’t able to play the music then they shouldn’t be on stage.

You rap: “I’m the calmest guy you’ll ever meet”. Where does that calmness come from?
I guess it might just be a theatrical display of my arrogance. I’m just trying to be honest, I’m very good at what I do and I’m just being confident. And also I like to conserve my energy so I can draw back to it when the time has come to do something that really matters for the performance.

Did you ever think of doing something else than rap, like writing a book or poetry?
I write all the time. I actually did a book of poetry and we produced 200 copies last year which we sold entirely on the first day. It’s called “Line Segments”.

You can find our review of this extraordinary concert here.

Evidence am Grübeln: „Throw It All Away“ // Video