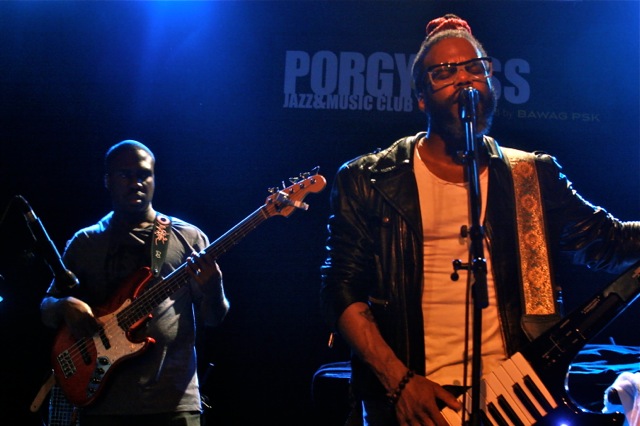 Letzten Freitag spielte das Robert Glasper Experiment aka Robert Glaper (piano/rhodes), Derrick Hodge (bass), Casey Benjamin (vocoder), Mark Colenburg (drums), im Wiener Porgy & Bess auf. Diesmal kommt das Review aus der Perspekive eines jungen, brasilianischen Jazz-Bass-Studenten namens Vinicius Ciccone Cajado:
Last Friday Musicians and music lovers came out to Porgy & Bess to see the highly anticipated concert of one of the most influencial pianists of our generation, Robert Glasper and his Experiment band.
Before the concert started, people on both floors of the jazz club already talked about their expectations; Lights went down and the band entered the stage, loudly applouded by the audience, and started right away after a very unformal introduction by Glasper.
The first song already had huge energy; The octaved bass from Derrick Hodge pumping tightly with the precise groove of drummer Mark Colenburg were the perfect match for the beautiful textures of Glasper´s chords. Casey Benjamin just confirmed the vibe with his vocoder – the space was „packt like sardines in a crushed tin box“ (originally by Radiohead).
Low lights, and a smell of insense made the experience even more sensorial, a perfect combination for another beautiful solo! But why not a bass solo? Derrick Hodge, alone, showed that technique and feeling really can be a perfect couple, and after giving tips of the next song in his solo the band entered the stage to start the next sound bomb: „Cherish the day“ (originally by Sade) ,which Casey Benjamin just blowed up with his sounds from outer space in a beautiful sax solo. From that on Robert Glasper Songs, with lots of pepper, and perfect seasoning for the hungry audience.
The concert also had an amazing bass and drums groove solo and other cover songs like ‚“ Can´t help it“ and ‚Smells like teen spirit“.
Conclusion: It was impressive to see such a versatile concert. Robert Glasper, Casey Benjamin, Derrick Hodge and Mark Colenburg have a complete domain of the atmosphere and instruments, which makes the great versions and compositions even more tasty when played live. If you haven´t seen The Robert Glasper Experiment live yet, you should better change that soon.
Photos © Isabella `isilistening´Schrammel

The Ezra Collective Shrine: „Where I’m Meant To Be“ // Album