Last time we saw each other we talked about the riots and the police brutality in Ferguson. You told me that you ‚re active in the „Ferguson Defense Fund„. Is the fund still active?
Yeah. It’s a matter of fact that members of Hands Up United inspired me to do the Ferguson Defense Fund, Tory Russell, Tef Poe and a couple of other people. There was actually a young men in St. Louise named Vonderrit Myers, who was murdered by the police. This case is not that famouse as Michael Brown. But there was a lot of action and protest around Meyers last night while I was on my flight to Munich. A lot of those people got arrested. We were making plans to be reactionary to the problems and be able to be proactive. These people created an action and we support it.

Which goals have you reached?
We gave most of the money to an organization which is responsible for belling out and getting legal aid to a lot of the Ferguson protestors. There were programs on the ground where we gave money to different organizations like Operation Help Or Hush and others. They were all grateful that we work in a community. It’s not only about belling out, it’s also about training and being a community. Training and preparation. 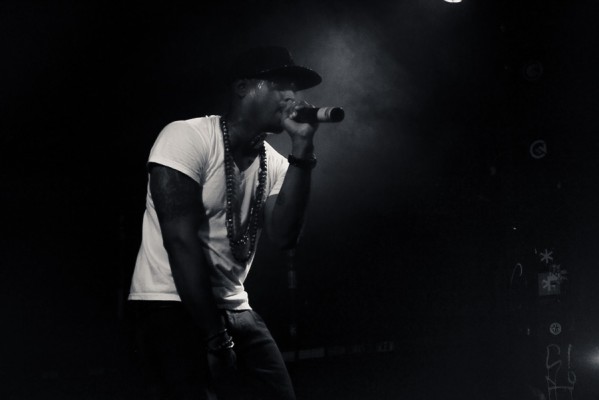 At first it was Ferguson and than Baltimore. Did America learn something out of it?
A riot is the language oft he unheard. America started with a riot – the Boston Tea Party wasn’t a peaceful civil rights action. It was a riot. That’s where America came from. But some of the most powerful changes in the world happened as a result of peaceful protests – Gandhi, Martin Luther King, Mandela. But violence happened to them. Gandhi was beaten, Mandela spent about 30 years in jail. So what we have learned is that the dial doesn’t move unless the people force it. The country is not interested in peaceful protests. There where no investigations in Baltimore. But now they are. You had a D.A. because there are murder charges and man slaughter charges against the police and that calms the community down. Because they became a countability. In 99% of theses situations the cops are in charge and not convicted. So, we’ll see. If they get convicted, thats a step in the right direction.

„In 99% of theses situations the cops are in charge and not convicted.“

Yesterday was the birthday of Malcom X. Which mindset of him could be projected on to the current situation?
I think Malcom is a great historical figure, because he understood the context of history. He went from street tuff to a criminal and to the revolutionary leader of the Nation of Islam till he starts his own thing and embraced other philosophies. All in the span of 40 years. I am nearly older than he was when he died. So he did so much in that timeframe. Malcom shows us that all of us can be heroes. The average citizen, the criminal, the person which the society has already counted out – they all can turn their lives and can be heroes.

The major of Baltimore, Stephanie Rawlings-Blake is black. It is a very complicated situation for her. Do you think the whole conflict is still about skin color?
The system of white supremacy that runs the world is based on economics. The slavery and the destruction of black people. They didn’t do it because they hate black people. They did it because it was economically and empowering to their opinions. That happens in Germany in a big way. And it happens in America in a big way. All over the world – in every country, where white people are in charge. History is systemic and not individual. It’s not about someone saying „ni**a“. It’s about health care, education, the job market – all these things are stacked against colored people to give white people the advantage. So even if you have a black president or black cops – it doesn’t change the fact, that we’re dealing with a system of racism. The personal success of people like Oprah, Diddy and Obama don’t change the over all condition of the black people. They are just anecdotes – inspirational and stuff. But, cool story bro, it doesn’t change the system.

There is a discussion about police body cameras. What’s your opinion on that?
Body cameras are good. The police has to be accountable. We need to be able to see the actions of the police. It’s not like there’s a camera in every corner. It’s not an addition to the surveillance. The more evidence, the better. But it’s an illusion that body cameras will stop anything. They had them when Freddie Grey died, but they were broken or turned off. It’s not gonna slow it down, but it makes it easier. I am down with that, definitely.

David Simon, the creator of the TV Show „The Wire“, said „Go home. Please!“. Would that have been the right way?
I don’t want to disrespect David Simon, he is an incredible writer – not just for „The Wire“.  But as a resident of Baltimore he has a different perspective than I do. He has given a lot to his city. But he can’t say that people who have a real cause to be angry need to go home. That’s their home. That anger makes sense. Is it productive? That’s debatable. I would love to say it’s not productive. From the bottom of my heart I really wish I could say that smashing a cop window is not productive. But if they didn’t do that, nothing would happen. To our society that cop window is more worth than black lives.

„The grind never stopped for the working class“ // Saba live

Some news-channels reported that Bloods and Cribs were bonding together against the police. What’s your opinion on that and if it’s true, is that a good sign or just another level of rioting?
Three things: First, I am not sure about the actual Bloods and Cribs in Baltimore. That might just be a bandana thing. Second, let’s imagine they were Bloods and Cribs. What people don’t understand about gang life in America is that especially black gangs started as a result of black people getting terrorized by white gangs like the KKK. These groups started to fight that and because of crack and poverty it is what it is now. I don’t look at gangs like the media. I see gangs as a tragic outcome of poverty and dissolution. The third is, this story is completely trumped up. I think that the police put this story in the media. That’s the smart play right now?

„I think that the police put this story in the media.“

In our last interview you said that you wish Obama to show up in this conflict. Is he reacting now in a more proper way?
I think Obama is very consistent in being the president of America. I think  – considering that he is the first black president of the country – that his reactions are very measured and very calculated. And I think he has done a pretty good job to face the problems of the community.
Last week Michelle Obama spoke about the hardships of being a black woman from her experience. But her comments were politicized – she is not even allowed to have her own opinion at this point. That’s a shame.

They invited Killer Mike to the White House Correspondents‘ Dinner. Is this a first step to invite HipHop to help in this conflict?
Will.I.Am was there as well. I am sure Common has been before, Beyoncé and Jay-Z – HipHop is in the house. The difference about Killer Mike is, that his success is completely independent. There is no major label behind him. He is from Atlanta and raps about drugs, but also about the problems with the police. He is an anomaly – there is no one like him.