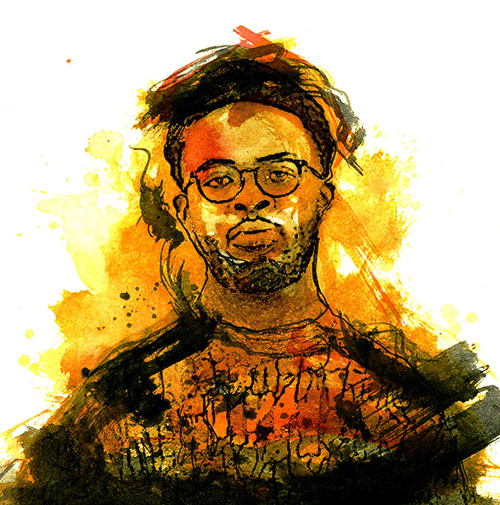 “Dude every time I play somewhere, somebody is always playing some Ringgo (MNDSGN) shit. Every fucking time. Its so sick.”

The Message: Even today sampling is still not fully accepted …
Knxwledge: It’s fucked up. I feel like otherwise nothing would be here. Everything was an idea before. Even the original shit is just influenced by a number of different people.

You use a lot of samples of movies in your beats. Which ones do you prefer?
I like the hood ones, but I feel like I already ran through them all. They are just so classic in themselves. New Jersey Drive of course, or Belly. These are two you can just chop forever. Super crucial fucking drugs. I know like every word in these. Amazing films, made in a dope point of time. They emulated it well.

Do you have the soundtracks all on vinyl?
Nah. I just have the whole thing rigged in the TV – so whatever I am watching I can just rip from. It’s fucked up. 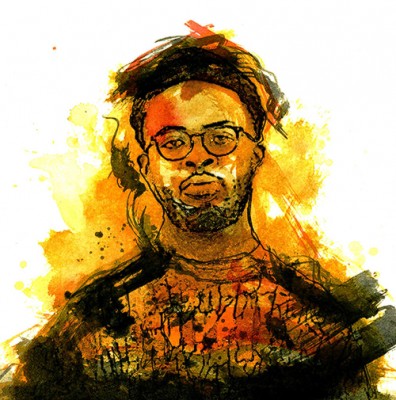 There are rumors that you are handing out all of your new stuff to Jeff Goldblum. Are you a fan of his movies?
Can’t really say I am. He just doesn’t live too far from me. I just threw him some shit. Maybe his dog ate it. It’s literally just up the street.

Back in New Jersey you learned to play a lot of instruments in the church of your aunt – all by yourself. Do you feel like that had a positive influence on expanding your beats?
Hell yeah. My family and me always tried to play over songs. Every time I am hearing something, an interesting melody, I play it over and learn the progression.

How many instruments do you actually play?
Man, I never counted – drums, keys, bass. These are just the mains. Randomly in middle school I played even trumpet for four years.

Some years ago you went to university.
Randomly – I studied computer science for like a year. Made too many beats within that year, too. But when I was maybe like three quarters through that year of studying, I had a crazy show. My first show pretty much ever. Didn’t even know I would play or this would be my beginning of fake DJing. You know just playing beats out of the shit I used to make.

The one you played along with Gaslamp Killer, Samiyam, Houseshoes and Danny Brown?
That’s the one dog, that’s the fucking one! Fucked up that‘s already so long ago. The homie who was throwing (Andres Sonikowa) – he was a college dude. It was a college show! Universities in the States get so much money. You can just invite fucking anybody. So this guy got this crazy beat line up. I remember this shit like yesterday. Literally met everybody that day.

Not surprisingly, you are with Stones Throw right now. Has anything changed for you?
Nah. They let me to whatever I want. Kind of the reason I signed. Everybody there is cool. Since that show I went to Stones every now and then. To use the studio, reunite, meet Wolf.

So you are still one of those classical LA bedroom producers?
Can’t get away from that shit for some reason. Can’t get over rolling out of bed and making beats. There is nothing like that. But I need a bigger room. Records are not for the bedroom I tell you that. Not the dusty ones at least.

What do you think about the rebirth of vinyl?
It’s fire. I am just crazy grateful to be at a label that is strictly thinking about the vinyl before a release. Love it. Just the rawest form to me – and the one that lasts. There are so many records from such early times and they are still around.

And there are these great album covers. Yours are full of pictures from your childhood. What about that?
I am grateful for my parents taking a lot of pictures when I was really young. We used to go to Jamaica a lot – my dad is Jamaican, my grandparents still live there. My mom I guess had a disposable camera. Hundreds and hundreds of photos.

You grew up in a very religious family. How important is that background for you now as a musician?
Of course your experiences make you who you are. The environment, all those little split seconds of flash of moments of those pictures. All the beats, all the videos – all that stuff. Instead of a religious person who would pray every day – even five times per day like a Muslim – I go back and forth to making beats. Five times per day. For me this is relatable. The way the music makes everybody feel. I try to create that every time.

2015 was an amazing year for you. First your LP Hud Dreems, out with Stonesthrow. And you started some crazy collaborations. You got a beat on Kendrick’s How to Pimp a Butterfly.
It’s funny, we are like the same age, but in two different places. The album is crazy. What is he gonna do? What do you do after an album like that. It was like a movie, an audiobook.

You are also in contact with Dr. Dre.
The first thing he heard was Suede, I guess. He liked it. We met in Moscow when Anderson and me were there. Premo made that one beat and Anderson laid it. Cool dude! He is not even a doctor but he is Dr. Dre! Its crazy man he is just the one. N*****s, worship Dr. Dre.

What about that Anderson Paak project NxWorries?
Early next year. The EP is going to drop before the album – a few joints and beats.

Is it true that you are collaborating with Action Bronson?
Yeah. Some shit for his album, a few joints. This dude is crazy. He comes to LA because he does the cooking and meets all these crazy chefs everywhere.

Do you have time to produce new stuff while you’re touring?
Yeah, especially this tour. Randomly been making a bunch of stuff. Left home with a bunch of samples and acapellas from my homies. I am getting stuff on the road, too. Actually I just sent some wax back. If you pack light you feel easy. You don’t have shit to clean up and have some time to mess around.

This website uses cookies to improve your experience while you navigate through the website. Out of these, the cookies that are categorized as necessary are stored on your browser as they are essential for the working of basic functionalities of the website. We also use third-party cookies that help us analyze and understand how you use this website. These cookies will be stored in your browser only with your consent. You also have the option to opt-out of these cookies. But opting out of some of these cookies may affect your browsing experience.
Necessary immer aktiv

Any cookies that may not be particularly necessary for the website to function and is used specifically to collect user personal data via analytics, ads, other embedded contents are termed as non-necessary cookies. It is mandatory to procure user consent prior to running these cookies on your website.