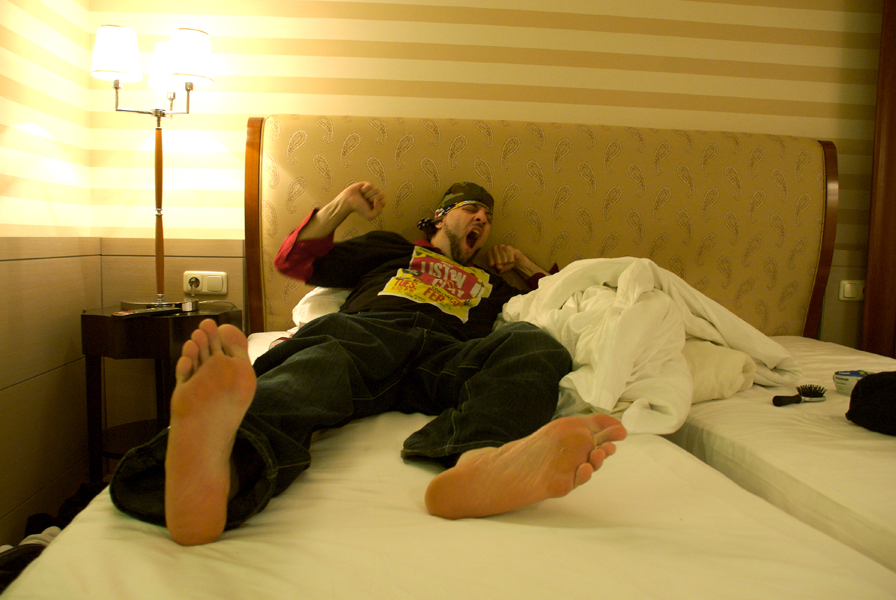 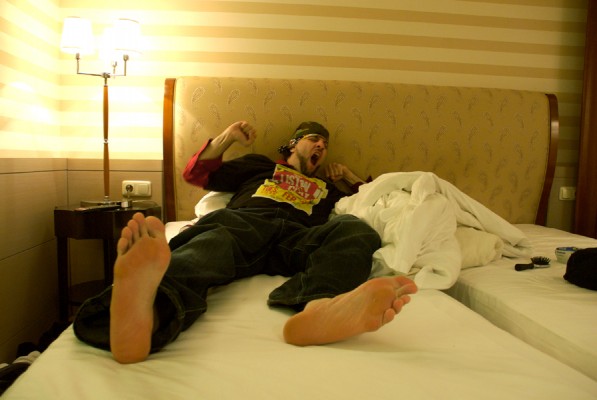 The Message: What defines a record label for you that does not “suck dick”?
R.A. The Rugged Man: That doesn’t really exist.

What should it be like?
A record label has to have complete confidence in the best artist possible and has funds to invest in the highest quality of an art form. Without manipulating the culture. And without jerking around the people that work their ass off for them.

With that said. What are your plans with AFRO?
We’re putting together the gameplay right now. We’re working on an EP with Mr. Green and also one with Marco Polo – and AFRO worked on some projects with DJ Premier. The main thing we gotta do is working on a classic debut album. So we’re gonna throw the EPs out to keep the buzz going, also some videos, but the official album has to be classic. That’s what we’re working on.

You once called yourself Crustified Dibbs – can you explain that name?
When I was a little kid, about 16 years old, I became R.A. The Rugged Man. That was my name and it sounds like a weird super hero type of person and I tried to think of something more different. I was sitting in a club in New York City in the early 90ies and I was like “Crustified Dibbs” – crusty, like Chubb Rock said, “Kids in the cribs want dibs on the big man.” That sounded slick. Who the fuck knows what that meant.

“God take and God give” – the famous line from “Uncommon Valor”. Would you call yourself a religious person?
Well, I believe in a higher power. I am not a big fan of organized religions that lie, manipulate and brainwash people. And I see in this day and age, a lot of atheists come out and try to act like if you’re not an atheist you’re just ignorant. That’s just as bad as a religious fanatic.

„Satan Rap, ISIS Rap, let them do it. We don’t have to fuck with that, it’s not part of our culture.“

As an example: The Ajnad Media Foundation, a media company of ISIS – they produce Jihad Rap and Pop. How much religious freedom should be allowed in music?
If they want Jihad Rap, let them do it. You shouldn’t take creative freedom away from anybody. If you wanna have skinhead Nazi shit, fuck ‘em, let them do it – you don’t have to listen to it. It’s all the same – Satan Rap, ISIS Rap, let them do it. We don’t have to fuck with that, it’s not part of our culture. Who would decide what is good or not? 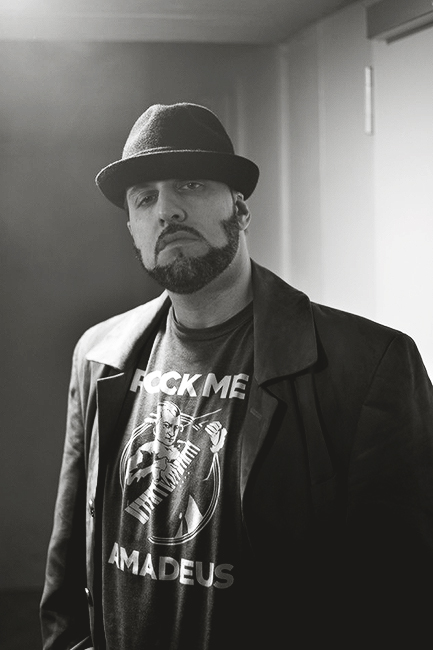 I see the problem. But what about the kids, they don’t even get the message.
It’s the same thing they said about Gangster Rap in the 80ies. Like “Fuck The Police”, the kids are growing up on that. Should they’ve taken that out of the streets? I am not a fan of any censoring.

Is there any medium you trust?
There are people with strong voices, who are part of the media – truthful and powerful voices. And you have those who want the biggest shine. When you look around and listen to everyone what they have to say and you decide for yourself what your opinion is. That’s how you do it, you listen to everybody and you go like “that guy is full of shit and that guy is full of shit”.

Would you say that the USA is a democracy?
I don’t know what the fuck is going on in America right now. Because it’s like a turning point. Right now, it’s very controlled and they try to tell the society what it should believe and shouldn’t believe. They don’t let you vote for anybody – they don’t give you an option – just Hillary Clinton or Bush or a Clinton again.

„If Trump could, why can’t Kim Kardashian.“

And Trump.
Trump is just a distraction. He has no shot. That’s just for media and for big ratings ‘cause he is a colorful, retarded personality. He gets the ratings up and gets people’s blood boiling and he makes the fucking dumb cunt Hillary Clinton look better. That’s why Trump is there. Hillary Clinton is our next president. And Hillary Clinton is an evil, demon fucking whore bitch. And Donald Trump is worlds most stupid, ignorant, non-qualified politician in a lot of years. But it’s all about social media and celebrity stuff. That’s why a rapper like Kanye West makes a joke like “I am gonna run for president in 2020”. If Trump could, why can’t Kim Kardashian.

Trump mentioned in a speech that everyone should wear a gun to protect themselves. What are your thoughts on gun laws?
Both sides will make the argument, because when a bad thing happens in the US they are all like, “Oh, we need gun control laws” and when something happens like in Paris they are like, “If there would have been no gun law, they could’ve protected themselves. Both sides politicize any death. As soon as death happens Hillary Clinton will get on it and pitch their side of the agenda and use it. But the thing is, the US is flooded with guns – but illegal weapons. There are so many regulations they are not taking care of.

It’s also in the roots and the history of the country.
Exactly. But every single person has a weapon illegally.

„I had six different guns in my life and none of them were legal […] Take the weapons out of the streets first.“

Do you have one?
I had six different guns in my life and none of them were legal. That’s part of America. Why not enforce the regulations that are already there, get those guns out of the fucking streets and then maybe talk about a little bit more gun control ‘cause you can’t even regulate that. If you take away the guns of the “normal” citizens who have a nice house and a family and a little gun in the safe, or if you try to take away a gun from a rape victim who carries a little 22 in her purse you will have a problem. Take the weapons out of the streets first. 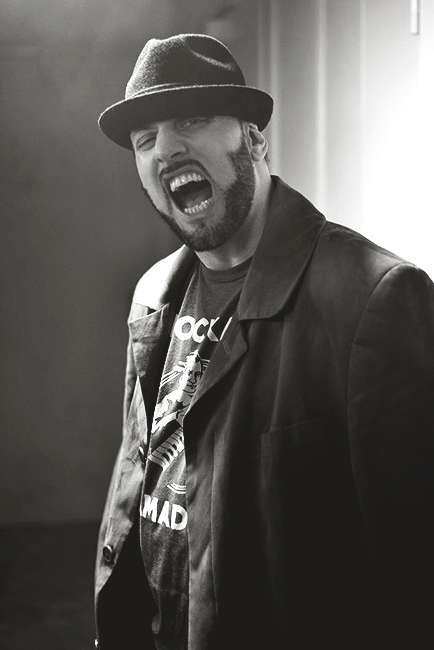 Speaking about decisions in and of America. What do you think about a ground offensive against ISIS?
Nobody knows what the fuck to do with ISIS. Putin doesn’t know, Obama doesn’t know and your guys don’t know – nobody knows shit. It’s the same with the refugees – bring them, don’t bring them. Nobody knows. But every side has its arguments. I think one side is paranoid and the other side is very naive. Honestly if they bring in a bunch of refugees and a big crime happens with one of the refugees, they’re gonna publicize the shit out of that, „See look what it’s doing!“ They already did it with France. But on the other side, if a white guy from America shoots somebody, they go, „It’s the white Christians who are the devils. They are doing it all.“ But nobody’s in reality, ‚cause they all wanna push their agendas – so there is no in between. Maybe it’s not the white Christians or the Islam who wanna kill everybody – but in the end, everybody is a human being. There is evil people who believe in Islam and there is evil people who believe in Christianity. There’s even evil atheists.

I’ve heard an old lady say that this is the beginning of World War 3.
They say it anytime, like in the 50ies, they had all the nuclear weapons and the fear “oh, Russia is blowing us up” and stuff like that. They’ve been scared of the end of time forever.

Would you see a good thing in an apocalypse – a restart?
Nooooo, I don’t wanna die – and all the kids and babies, no. I am not a higher power, I am not god.

What would you do in a post-apocalyptic world?
I would try to survive and I would see what happens.

This website uses cookies to improve your experience while you navigate through the website. Out of these, the cookies that are categorized as necessary are stored on your browser as they are essential for the working of basic functionalities of the website. We also use third-party cookies that help us analyze and understand how you use this website. These cookies will be stored in your browser only with your consent. You also have the option to opt-out of these cookies. But opting out of some of these cookies may affect your browsing experience.
Necessary immer aktiv

Any cookies that may not be particularly necessary for the website to function and is used specifically to collect user personal data via analytics, ads, other embedded contents are termed as non-necessary cookies. It is mandatory to procure user consent prior to running these cookies on your website.